Guru Nanak travelled everywhere with his faithful companion Mardana. One day he made his way to a sacred place called Haridwar, which means "God’s Gate." This place, where three holy rivers join together was said to have been blessed by the gods, Shiva, Brahma and Vishnu. Huge crowds of people gathered there,. They were chanting and praying. Led by so-called holy men, called Brahmins, the people threw water towards the morning sun to honor people in their families who had died. As this huge crowd of people chanted and threw water, Guru Nanak went into the river too and he also began throwing water. 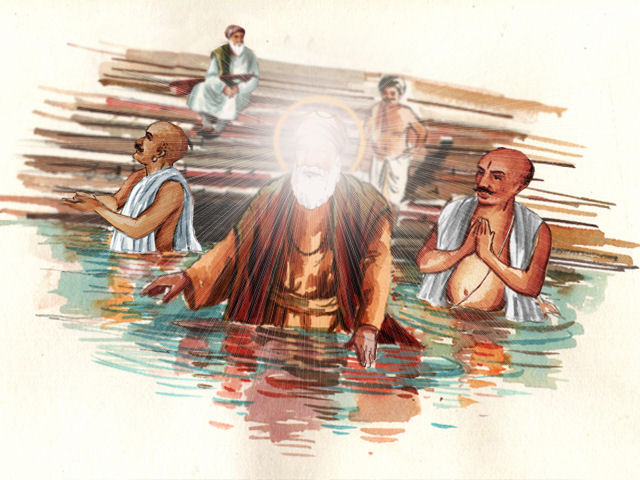 But there was something different about how he did it. Everyone was throwing water towards the rising sun, but Guru Nanak was throwing water in the exact opposite direction as everyone else. A crowd gathered around to see this crazy man. Obviously he didn’t know what he was doing! A Brahman said, "If you are not hindu why have you come to a hindu place of worship?" "Yes" said another "Foolish man! Who has taught you to do such a strange thing?" Another one said, "Why on earth are you throwing water the wrong way?" 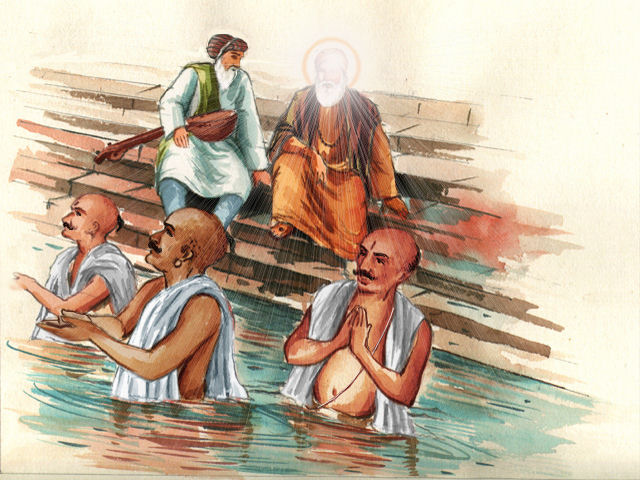 Guru Nanak looked at the Brahman and said, "Why do you throw water to the sun?" The priest said proudly, "We throw water to the sun to honor our ancestors, it gives them happiness, blessings and prosperity." "So, how far away are your ancestors?" Asked the Guru. A man nearby heard this conversation. He had read a lot of books, so he thought he had the right answers to everything. He said, "Our ancestors live thousands and thousands of miles away." 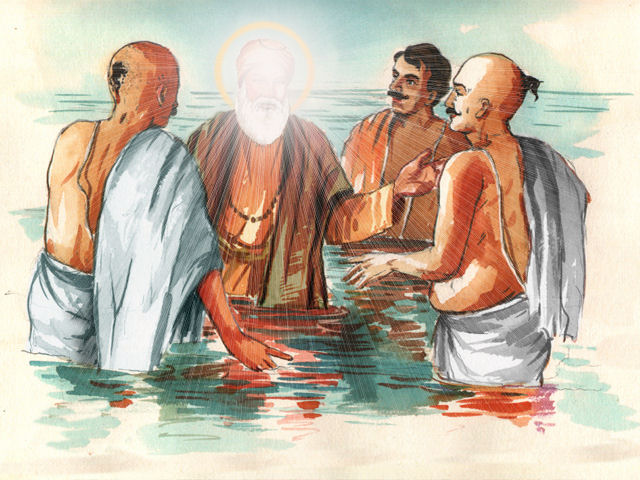 Again, the Guru started throwing water in the direction away from the sun. He was throwing the water faster and faster now, as though he was putting out a fire. As he splashed the water around, the Brahmans yelled, "STOP, STOP, what are you doing!!?" Guru Nanak was panting from all his splashing. He told them, "I have a farm in the Punjab which is in this direction. My fields really need water, especially at this time of year. If I don’t get this water over to them, my crops might dry up!" 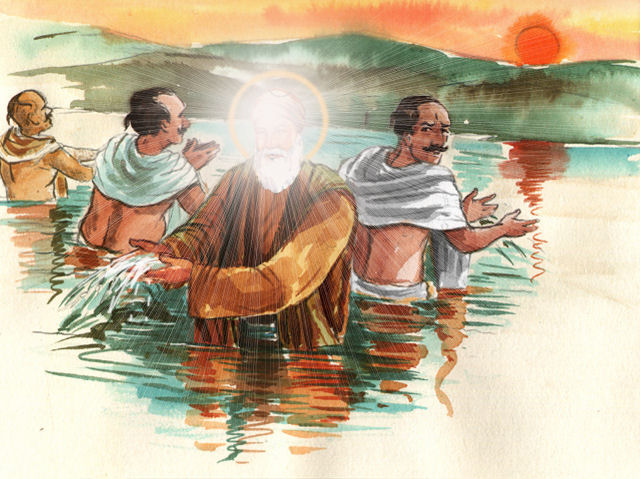 Now they really thought he was totally crazy. One of them asked, "How can water get from here all the way to the Punjab?!" The Guru said, "Well, my farm is much closer than your ancestors. How can water reach your ancestors if it can’t even reach my farm in Punjab?" Well, it was true - his fields were much closer than the ancestors who, according to the Brahmins were thousands and thousands of miles away. The Brahmans still did not understand what this strange man was talking about. But Guru Nanak read their thoughts, and pointed to each one of them saying: "You were thinking of business you are going to do in Kabul," the man he pointed at looked very surprised. That was exactly what he was thinking. Then Guru Ji pointed to another man and said, "And you, dear Brahman, you are thinking of your business in Delhi." Guru Ji continued, "Pundit Ji, you were thinking of how you are going to make money from the people who are coming here today." He knew precisely what each of them was really thinking. 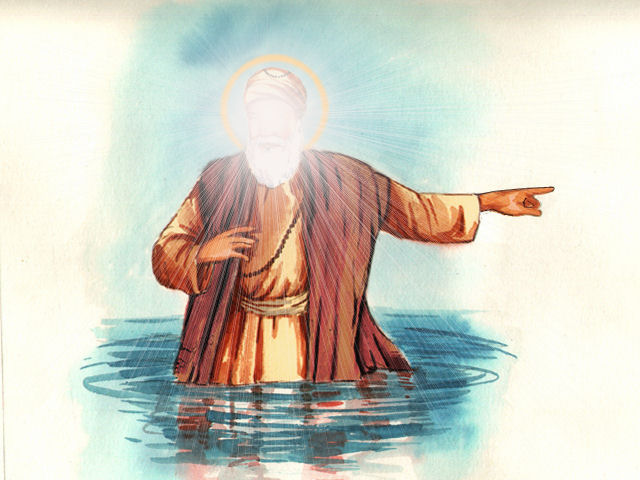 Now the men were shocked and defenseless. He had just proven that their minds were somewhere else entirely. Their minds were thinking of money and they didn’t hold God in their hearts. They were the spiritual leaders, but they were thinking of money instead of God. Guru Nanak had humbled them. "What can we do?" Asked the Pundit. The Guru said "Sincerely chant Sat Nam and let it fill you with love. Pray from your heart. Be full of God every day and every moment. Help people, be with them and guide them to the Truth." As these deep words sank in, the men stood there still in silence. Mardana and Guru Nanak continued on their journey spreading truth with love and kindness. What does it matter what we do or what religion we believe if we don’t keep God in our Hearts? Let us be honest with everyone, and especially with ourselves!