Sikhism, known in Punjabi as Sikhi, is a religion for all. Sikhs believe God is the same for all races and people. Sikh Practices can be summarized in three words: Pray, Work and Give.

A Sikh's goal in life is to lead an exemplary existence so that one may merge with God. Sikhs should remember God at all times and practice living a virtuous and truthful life while maintaining a balance between their spiritual and temporal obligations (the two swords in a 'Khanda' are a reminder of this).

Sikhism doesn’t ask people to turn away from ordinary life to get closer to God. In fact it demands that they use ordinary life as a way to get closer to God. Sikhism is a practical religion something to be lived according to a pattern. Its main virtue is simplicity. There is no supernaturalism or mythology on which it rests. It does not believe in devils or angels or heavenly spirits.

Sikhs serve God by helping others (Give)

A Sikh serves God by serving (seva) other people every day. By devoting their lives to service they get rid of their own ego and pride. Many Sikhs volunteer in the Gurdwara as their service to the community. The Seva ranges from working in the kitchen to cleaning the floor. The Langar, or free food kitchen, is a community act of service. Sikhs also regard caring for the poor, sick or elderly as an important duty of service.

Unlike many religions Sikhism teaches the full equality of men and women. Women can participate in any religious function or perform any Sikh ceremony or lead the congregation in prayer.

Sikhs believe that God is inside every person, no matter how wicked they appear, and so everyone is capable of change.

Sikhs do not follow blind rituals such as fasting, mandatory visiting places of pilgrimage, superstitions, worship of the dead, idol worship etc.

Most human beings can’t see the true reality of God because they are blinded by their own self-centred pride and concern for physical things. Sikhs should eliminate lust, anger, greed, attachment and ego/ pride from their lives. They should not take intoxicants, eat meat, engage in worthless talk.

Sikhism is a democratic religion. The decisions of the Sangat are regarded as resolutions having the force of law (Gurmatta) Guru Gobind Singh Sahib vested the authority of the organisation in the Panth.

The Sikh way of living is described as an "active, creative, and practical life" of "truthfulness, fidelity, self-control and purity". Sikhs are expected to embody the qualities of a "Sant-Sipāhī"—a saint-soldier, this means to love God, meditate on God, keep God in the heart, feel God's nearness and also be strong, courageous and ready to fight to protect weak people from cruel unjust attackers. 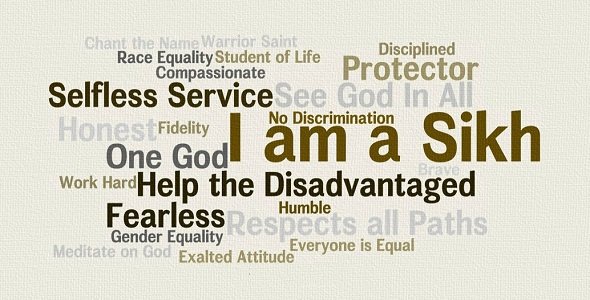 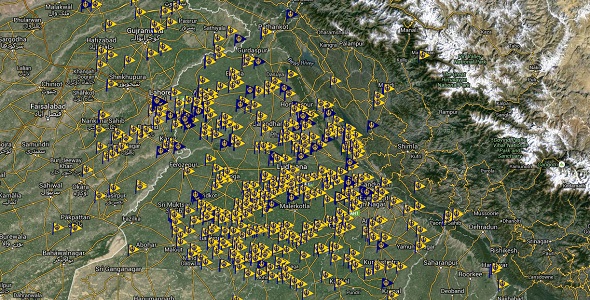 There are many hundreds of Historic Sikh Gurdwaras that are not very well known. Sikhs have an amazing history that needs to be understood and preserved.

Learn about the historic gurdwaras, locations and stories associated with the Sikh Guru's (Guru Sahibhan) and other historic Sikhs (during the period of the Sikh Guru's).

The Sri Guru Granth Sahib Ji written in the Gurmukhī script, in various dialects – including Arabic, Lehndi Punjabi, Braj Bhasha, Khariboli, Sanskrit and Persian is truly a holy book for ALL.

If connection is lost, press 'Play' again. Audio is not played during Ardas and overnight (at Amritsar local time).

Mool Mantar is the first (and most important) composition in the Sikh holy text, the Sri Guru Granth Sahib Ji. It is the basis of Sikhism.

Sikhs are not officially recognized in India

The picture above shows a 'Saranda' which is a unique instrument, which originated amongst the Sikhs.

Saaj is a Punjabi word commonly used to refer to musical instruments.