The symbol of different religions reflect certain fundamental concepts of the faith. The symbol in Sikh religion derives its name from the double edged sword – The Khanda – at the heart of the logo. The Khanda is a potent metaphor of divine knowledge, its sharp edges cleaving truth from falsehood.

The circle around the Khanda is the Chakar – a figure without beginning or end – symbolising an infinite God. An infinite God that also resides in its creation, the world and the universe. The aim of Sikhs is to seek divine knowledge on the path to ultimate union with God, a state as complete and perfect as the circle.

The two Kirpans that flank the Chakar symbolise the twin concept of Miri and Piri – temporal and spiritual responsibility. They occupy a central place in Sikh theology which places equal emphasis on the worldly and spiritual aspiration of the individual to serve society.

The twin Kirpans in the logo thus represent the balance between personal spiritual salvation and the obligation to serve others. Individual action is to be governed by Godliness; at the same time, the practice of religion must resolve around service to the poor, oppressed and the disadvantaged.

The Kirpan is also worn on the person at all times, as an article of faith, by the Sikhs who aspire to meet the discipline of the Khalsa order. It serves as a reminder to all Sikhs of the duty to serve the needs of others, before their own. 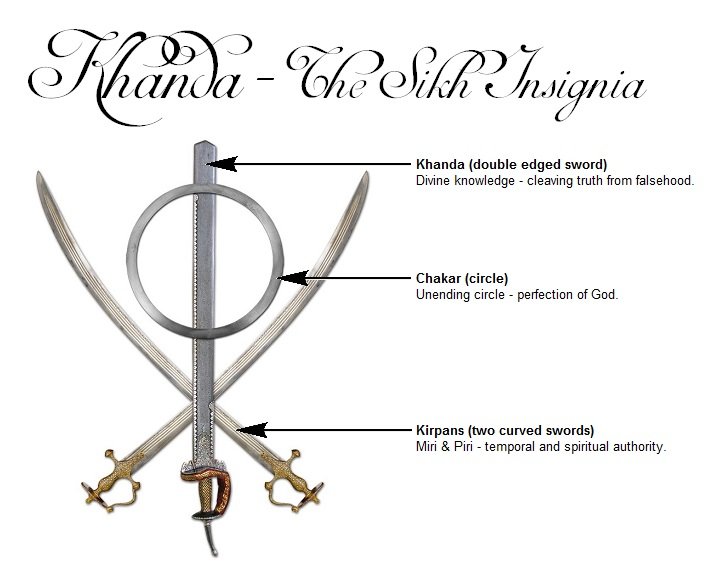 The symbol on the Nishan Sahib cloth is the Khanda emblem. The Nishan Sahib, as a matter of religious injunction, must be hoisted at a high-level in every Gurdwara building. It is this Nishan Sahib that is referred to in the daily prayer (Ardas) of the Sikhs asking for immortality.

According to the Rehat Maryada in Punjabi (Sikh Code of Conduct) the colour of the Nishan Sahib should be Basant or Surmai. Basanti color comes from Basant - very closely tied to the yellow color of mustard flowers and the flowers of the Kikkar tree in northern India. Surmai is Navy Blue. The english version of the Rehat Maryada lists the Nishan Sahib colour as 'xanthic' which is yellow or of 'greyish blue'.

Somehow, in recent times, the traditional Basant colour of the Nishan Sahib has been replaced by the current Saffron (orange) colour. Saffron represents valour, courage and independance for Sikhs (particularly after the Sikh Genocide of 1984).