Hazur Sahib is a title of reverence, meaning 'Exalted Presence'.

Takht Sri Hazur Sahib is situated on the banks of Godavari River in Maharashtra. This is the place where Sri Guru Gobind Singh re-joined with God and commanded Sikh's to follow the Guru Granth Sahib as the Guru.

The inner room of the gurdwara is called the Angitha Sahib and is built over the place where Guru Gobind Singh was cremated in 1708.

At the time of Emperor Bahadur Shah's march towards the south via Rajputana, Guru Gobind Singh accompanied him with his own disciples and followers. Crossing the Tapti in mid-June and Ban Ganga on 13 August, the two camps arrived at Nanded towards the end of August 1708.

Bahadur Shah, after a brief halt, crossed the Godavari and proceeded on to Golkonda, but the Guru stayed behind at Nanded. Here he converted a Vaishnavite Bairagi recluse, Madho Das, also known as Lachman Dev, who after initiation into the Khalsa fold, received the name of Banda Singh.

Two Pathans came to Nanded, from Punjab, on the trail of Guru Gobind Singh. They had been hired by Wazir Khan of Sirhind, who felt threatened by the conciliatory negotiations going on between the Emperor and Guru Gobind Singh. These Pathans, the name of one of them is recorded as Jamshaid Khan, dissembling as interested listeners, started attending the evening diwan or service.

Finding the Guru alone in his tent at night, they fell on him inflicting a stab wound. Before the blow could be repeated, the Guru despatched one of the Pathans with his own talwar. The other was killed by his followers as he tried to escape.

The Guru's wound was deep, but initially healed after being stitched by a european surgeon. However the wound re-opened a few days later when the Guru was stringing a bow for one of his Sikhs and the Guru re-joined with God after declaring the Guru Granth Sahib as his successor, thus ending the line of personal Gurus, Guru Gobind Singh re-joined with God on 7 October 1708.

Guru Gobind Singh had desired one of his Sikhs, Santokh Singh, who supervised the community kitchen, to remain in Nanded and continue running the Guru ka Langar. A number of other Sikhs also decided to stay back.

The Sikhs built a room over the platform where Guru Gobind Singh would sit while holding his court and installed the Guru Granth Sahib on it. They called it Takht Sahib. Guru Gobind Singh, while conferring Guruship on the holy Book, had himself named Nanded as 'Abchal nagar' after the first word of a tuk read at random on the occasion. Abchal literally means 'immortal or everlasting' and nagar means 'town or city'.

The Takht houses both the Sri Guru Granth Sahib and the Sri Dasam Granth. This follows the pattern of Takht Sri Harmandir Sahib Patna. Some of the 'rituals and ceremonies connected with working' are peculiar to this Takht Sahib. 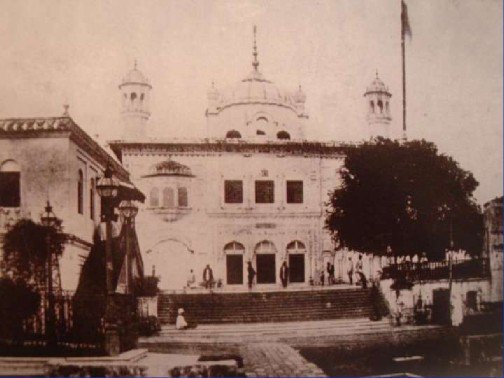 Around the same time the Nizam of Hyderabad State a Muslim Ruler of the Deccan Region raised a contingent of Northern Sikhs as part of his army. Most of these men settled permanently in Hyderabad State and also many militant and devout hindus of the Deccan embraced Sikhism in the 19th century. Local hindus also have a high regard for the Guru Gobind Singh and gurdwara.

The present building of the gurdwara was constructed by Gulab Singh of New Delhi. It was completed on 13 April 1968. The main hail has a canopied throne of white marble where the Guru Granth Sahib is installed.

Around 1823, Raja Chandu Lal, Diwan of Hyderabad state, had the management of the Gurdwara made over to the Udasis. He also secured for the Gurdwara an endowment of about 525 acres of land.

After the Nizam enlisted a troop of Sikhs in his army their was an influx of Sikh population, the Udasi influence receded. Sikhs assumed the responsibility for religious services in the Gurdwara at Nanded, whereas the administration was taken over by the Nizam's government.

The control of the main Gurdwara and other gurdwaras at Nanded was transferred to a 17-member Gurdwara Board, with a 5-member Managing Committee constituted under the Nanded Sikh Gurdwaras Act passed on 20 September 1956 by Hyderabad state legislature.