Every morning, Guru Nanak got up early and went to take a bath in the river. Then, when he felt clean, he said his prayers. Guru Nanak loved to pray.

One day, as the twilight was just giving way to the dawn, Guru Nanak’s friend Mardana was sitting by the river. He saw Guru Nanak prepare to bathe as usual; leaving his clothes on the river bank, Guru Nanak waded out into the deep, clear river water and dipped his head beneath the cool, flowing stream. Mardana sat on the bank. 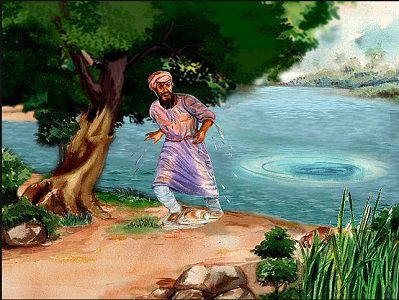 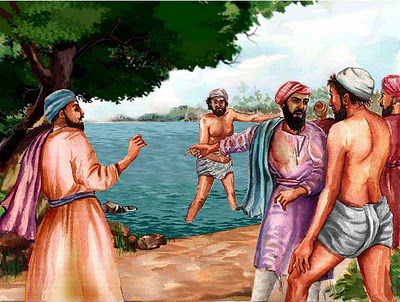 Suddenly Mardana was aware that the small pile of clothes had been by the bank a long time – and Guru Nanak had not come out of the river. He ran to the bank, and scanned the still waters, calling his friend’s name. No reply broke the quiet morning air. The river flowed calmly, unbroken by any swimmer’s movement.

Mardana was worried, and the people of the village came running as they heard his urgent shouting, his voice full of the fear that Guru Nanak had drowned. They searched all morning, bringing nets to drag the river, going several miles downstream and searching the opposite bank for any sign of Guru Nanak at all. Nothing. 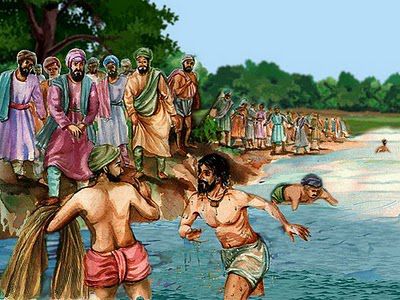 One by one, some sooner than others, they went back to the village. Guru Nanak must have drowned. Mardana and Guru Nanak’s sister waited, watching the river flow by, with tears flowing down their own faces. 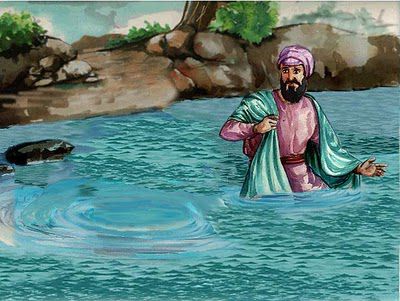 The next day, nothing. But amazingly, on the third day, without fuss or surprise, Guru Nanak came back out of the river alive and well. He sat on the bank, dripping, quiet, contemplating. He seemed absorbed by some mystery or secret, and spoke not one word. Mardana and his sister, and other friends and villagers gathered at the bank as word spread quickly round the village: 'Guru Nanak’s back’.

The crowd wondered what had happened to Guru Nanak. After a long silence, Guru Nanak spoke: "There is no Musalmaan. There is no hindu. God is not a hindu or a muslim. Whose path shall I follow? I will follow God’s path." 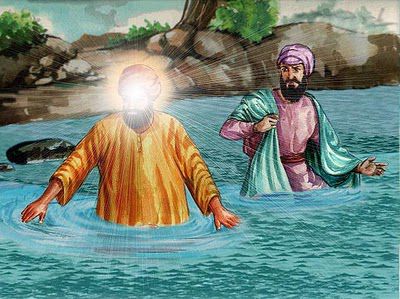 Some of the crowd drifted away, shrugging, going back to work. Others were puzzled about Guru Nanak’s disappearance, and his words. Mardana was just glad to see his friend alive again.

Guru Nanak could not speak to them about where he had been for the three days, or what he had experienced, but he was different – he had changed. He went to his house, and took most of his possessions to give away to poorer people. 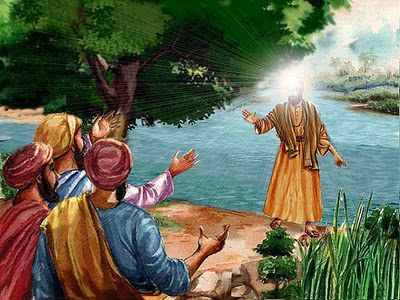 During the period Guru Nanak was presumed drowned he had a vision of God's presence where he was entrusted by the almighty with the task of preaching the Divine Name (naam) to the world. The almighty gave him a goblet brimming with nectar of 'naam' which Guru Nanak drank and then almighty commanded:

Go hence and do the work for which thou wast born.

People of Kalyug have adopted horrible practices and are extremely degraded in mind.

They worship a variety of gods, have forsaken the Name and are immersed in sin.

Go thou, spread Love and Devotion to the Name, and lighten the burden of the earth.

Go thou, and glorify the name of God and destroy hypocrisy."

The Guru then sang the following Shabad:

"Were I to live for millions of years and drink the air for my nourishment;

Were I to dwell in a cave where I beheld not sun or moon, and could not even dream of sleeping;

O true Formless One, Thou art in Thine Own place-

As I have often heard I tell my tale- if it please Thee, show Thy favor unto me.

Were I to be felled and cut in pieces, were I to be grounded in a mill;

Were I to be burned in a fire, and blended with its ashes,

Were I to become a bird and fly to a hundred heavens;

Were I to vanish from human gaze and neither eat nor drink,

Nanak, had I hundreds of thousands of tons of paper and a desire to write on it all after the deepest research;

Were ink never to fail me, and could I move my pen like the wind,

I should still not be able to express Thy worth; how great shall I call Thy Name?"

Then a voice was heard,"O Nanak, to him upon whom my look of kindness resteth, be thou merciful, as I too shall be merciful. My name is God, the Primal Brahm, and thou art the Divine Guru (Mei aad Parmeshar aur tu Gur Parmeshar)."

This has been the revelation of the Puratan Janamsakhi. The Guru himself confirms that the almighty asked him to go to the world and sing his praises. Some time after this experience, Guru Nanak wrote the following poem:

"Me, a minstrel out of work, God applieth to his work;

Thus spoke the almighty unto me,

Night and day, go and sing my praises.

The almighty again did summon this minstrel to his most exalted court.

On me he bestowed the robe of honor of his praise and prayer,

On me he bestowed the goblet brimming with nectar of his holy name,

Those who at the bidding of the Guru,

Feast and take their fill of the lord's holiness attain peace and joy.

Thy minstrel spreadeth thy glory by singing thy word;

Nanak, he who uttereth true praises obtaineth the perfect one."

After three days when Guru Nanak reappeared, some people saw a halo around his head. After Guru Nanak's reappearance from the river, Guru Sahib declared "there is no hindu and no musalmaan" (meaning that there was no difference between people, although some interpret that both hindus and muslims had forgotten the precepts of their religions) word spread that Guru Nanak had reappeared.

Some people say that Guru Nanak's Guruship started with his reappearance from the water. There are three entities in Sikhi - God, Guru, and Gurbani (Divine Word). There is only One God; God sent his emissary, the Guru, who is embodiment of the Divine Light. God delivered the Divine Word (Gurbani) through the Guru.

Without the Guru, there can be no Gurbani. Guru is a channel through whom Gurbani is delivered. Therefore, when at the age of seven, Guru Nanak delivered the first Divine message to his teacher (Raag Asa Mohalla 1, Patti Likhi, Ang 432), he had to be and was the Guru. Before disappearing in the river, a lot of Gurbani had already been delivered by the Guru. He was, thus, born as Guru and his Guruship started from his very birth.

Bhai Gurdas, an early Gursikh writes that first the almighty bestowed blessings on Baba (Guru Nanak) and then sent him to this world to spread the Divine Word:

Who was Guru Nanak's Guru? When he was asked, who his Guru was, Guru Nanak replied that God Himself was his Guru:

"Unfathomable and Infinite is God Who acted as Guru of Nanak."