This guide will introduce the concepts behind Unicode and how it can be used for writing Punjabi in Gurmukhi script. It is designed for people who are familiar with Gurmukhi and have used Gurmukhi on a computer before.

Traditionally, Ascii fonts sets have been used to represent different languages on computers. This is an extension of using different fonts within the same language. For example, when writing in English, one can use various font sets like "Times Roman" or "Arial", etc. This method has many restrictions and disadvantages when used to represent characters of different languages. The main disadvantage is the none compatibility with other computers; it is a non-regulated and non-standardised system; every computer needs to have "the particular fonts set" loaded before the text will display.

To resolve problems associated with representing characters of the many different world languages, the computer industry has come up with a better solution. This is to use a "universal" method of representing the world's many languages - the solution has become known as Unicode.

How Unicode differs from fonts

Historically, Gurmukhi has been represented using vast numbers of proprietary fonts – each with their own encoding method and keyboard layout. They worked by changing the appearance of Latin text characters so that they formed Gurmukhi. For example, with AnmolLipi the Latin capital letter ‘A' represents Era.

Using a different font would corrupt the Gurmukhi text and make it unreadable. For example, DrChatrikWeb shows the same letter as Ura.

Unicode does away with this ambiguity. Instead, it represents Gurmukhi with its own characters and does not use Latin text. This is standardised on all computers so no matter what font you use, the text will be the same!

Unicode also separates encoding from input. This means that you can have any type of keyboard layout that you want and the underlying text will always be the same. 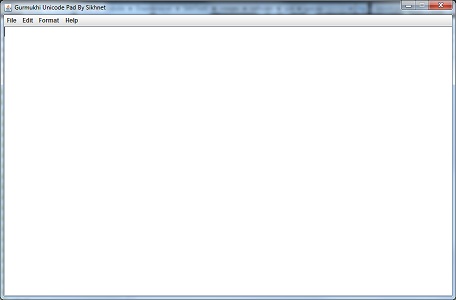 Gurmukhi Unicode Type is an application by Sikhnet that is designed to type Gurmukhi text in Unicode.

Once downloaded, right click on the zip file and 'Extract All...' to a location of your choice.

Run gut.exe to use the application.